Festival seasons is going around the corner and people are all set to enjoy the live music along with some great beer and probably lots and lots of sunshine that would heat up the entire atmosphere. Unarguable, there is something really terrifying about attending a live music festival. Imagine yourself in a crowd of thousands and more singing and dancing along, sounds amazing right? Well, that’s the exact experience that a live music festival would give you. One moment you will be dancing and cheering with your friends amidst the crowd and the very next moment you will have an adventurous experience of hours looking out for your friends. With great music artists across the globe, there comes plenty of music festivals organized at the different parts of the world. So, if you are confused with which one to attend do check out the list of most popular music festivals in the world; 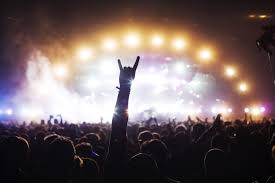 Tomorrowland music festival, one of the most hyped music festivals mainly among-st the millennial’s takes place in Boom, Belgium. First held in 2005 and since then it is considered to be the world’s largest music festival and this makes Tomorrowland to be included in every music lovers to do list. The festival usually stretches for over 2 weekends and have an estimated audience of over 400000 people.

First held in Miami, Rolling Loud Music Festival is a 3 day music event and is currently the largest Hip-Hops festival which now hosts in different parts of the countries such as Northern California, Italy, Europe and Japan. Kendrick Lamar, Kodak Black, Lil Uzi Vert, Lil B are some of the most popular music artists that has performed in this music festival.

Currently, Mysteryland is the most popular electronic festival held in the Netherlands. The festival welcomes a crowd of almost 10000 plus fellows from various countries. Every year this music festival intends to re-unite friends and make memories for life while enjoying great music. The festival lines up more that 300 artists to entertain the audience of all genres with spectacular electronic music widely spread for over 17 stages.

And here the list ends. Undoubtedly there are many more huge music festivals to attend but the above listed are considered to be the best ones to begin with. To know more music festivals and events, stay connected to us. Thank you for your time.

Arjun
Hello everyone, My name is Arjun and I'm a guitarist by profession which means I'm into music and have pretty much good information related to music, so I will be sharing the same to the world out there aspiring to be a musician.

Types of Music Are Known to Dramatically Improve Productivity

Don’t you agree that life without music wouldn’t the best of its kind. In this world, everyday one would look out for escapes and music is that one great escape for anyone to relive, refresh and detox from the hectic life schedule and enjoy the most of yourself. Well, it’s the beginning of the year […]